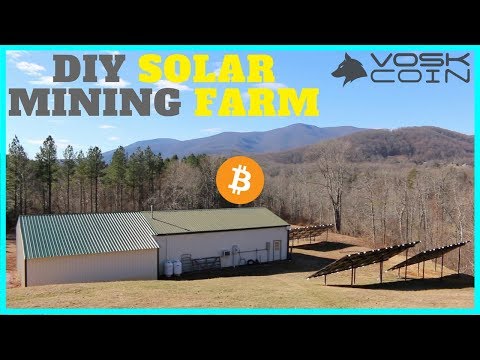 What is Dago Mining?

Green energy for bitcoins, ethereum, and other cryptomonetes mining. Dago Mining has one initial cost and zero cost on consumption. The cost of the energy component gives profitability to mining. We create our own green renewable energy power plant and we will not have any future energy cost increase. There is no cost per Kw schedule, only a small annual maintenance price (0.01 $ per Kw), with a 20-year warranty on plant's components.
About Dago Mining When cryptomining was still in its infancy, it was well distributed among a couple of thousand private miners, governed by transparent rules and not harmful to the world environment because the energy requirements were microscopic. During last years, all this has changed: Dutch bitcoin analyst Alex de Vries, who operates a Bitcoin Energy Consumption Index on the website Digiconomist, has produced estimates of growth of energy consumption and they are alarming. If bitcoin miners are using the most efficient machines possible, the lowest amount of electricity they could possibly be using is 39 terawatt hours, de Vries said in an interview. That's about as much as the entire country of Slovenia. De Vries said less conservative estimates make it entirely possible that bitcoin is using as much energy as Ireland, which consumes about twice as much as Slovenia, or about 1 percent of the U.S. total.
The problem is getting worse, said de Vries, who estimated the annual amount of energy consumed by bitcoin rose by a fifth in the final weeks of 2017. Even worse, the concentration of mining power in the hands of a couple of large corporations is distorting the formerly democratic decision- making process in these networks: changes in protocols and hard forks are in danger of being influenced by the economic interests of a few.
DAGO mining has designed a mining system with three technologies all together: a high efficiency photovoltaic system that uses solar concentration panels, combined with an innovative energy storage system in salt water batteries that will bring the farm to be self-sufficient in terms of energy in 12- 18 months from the start. The progressive construction and assembly of the hardware of mining uses high performance GPU (not only Graphics Cards) and ASIC Chip already on the market. Everything is cooled by “Immersion Cooling” in order to exploit the possibility of overclock without losing stability and durability. Using the dynamics of exponential growth for both, we promote climate preservation and the welfare of our token holders. It is the physical incarnation of the blockchain spirit: a robust and decentralized system that can withstand disruptions in government policies, price structuresand the energy supply.
RECOMMENDED EXCHANGE LIST
Binance
Kucoin
Bit-z
Bibox
Coinegg
Huobi
SECURE WALLETS
Ledgerwallet
Trezor
Ellipal

Reports shows, Crypto miners are using more electricity than Serbia, Eric Holthaus calculated that by July 2019 Bitcoin would require more electricity than all of the United States and that by November of 2020, we’d use more electricity mining than the entire world. This sort of precipitous rise is stunning and poses great danger towards our climate in which its effects are already evident. Cryptocurrencies are here to stay but its environmental effects need to be addressed early on. HashByte ensues to foster the current cryptocurrency mining landscape towards a green/renewable model, annihilating the need for fossil fuel powered electricity.
About HashByte As cryptocurrency adoption increases, experts have realized that there is a hidden impact of blockchain on the environment. Per the Guardian News, in a 1/17/18 article titled, Bitcoin’s energy usage is huge – we can’t afford to ignore it, “in November 2017, the power consumed by the entire bitcoin network was estimated to be higher than that of the Republic of Ireland. Since then, its demands have only grown. It’s now on pace to use just over 42TWh of electricity in a year, placing it ahead of New Zealand and Hungary and just behind Peru, according to estimates from Digiconomist. That’s commensurate with CO2 emissions of 20 megatons – or roughly 1 (million) transatlantic flights.”
Bitcoin alone produces 17.7 million tons of carbon emissions each day, and once other cryptocurrencies are included, the carbon emissions increase that number by close to 50 per cent. Also, the energy demand of mining rigs and mining farms is creating a huge strain on the limited supply of energy available. This added demand will only increase the likelihood of energy companies turning to more and more fossil fuels to meet the demand. The HashByte team noticed this, and they have embarked on a journey to create a more sustainable cryptocurrency mining approach.
HashByte is currently beginning to solve this problem by liaising with renewable energy firms in Europe to create cloud mining contracts that rely only on wind and solar power. The technology is already there, and all that was needed was a team willing to use it to make green mining possible.
HashByte currently uses leased windmills and solar panels in different parts of the world to mine Bitcoin, Ethereum, Monero, and Litecoin efficiently and cost-effectively. The benefit over conventional mining farms is that there are no high operating costs due to high energy bills and these savings are passed back to our contract holders. This allows us to increase the profits for investors on our platform.
We are currently issuing HSB tokens, an Ethereum based ERC-20 token for HashByte to raise funds for further research and development for the next stages of our plan. Sequentially we intend to create:
A green mining rig for miners that requires less energy to operate and returns higher profits because of that. HashByte is also developing the HashByte EcoChain that will use consensus algorithms with low energy consumption. Finally, the HashByte EcoChain will allow HashByte to offer a new cryptocurrency called Gash to users of the HashByte EcoChain. Gash will be secured, available internationally, fast and have no transaction fees because the consensus will be provided using energy efficient algorithms. An added benefit of the Gash coins is that they will be utility coins, and as such, they will not be as volatile as the speculative coins in most other blockchain startups.
EXCHANGE LIST
Binance
Huobi
Kucoin
Bibox
Qryptos
Satoexchange
BIGone
Bitrue
Bilaxy
Bit-Z
Linkcoin
SECURE WALLET
Ledgerwallet
Trezor

Bitcoin Mining With Solar: Less Risky and More Profitable Than Selling to the Grid . The energy used to mine bitcoin has long caused debate over whether it’s a wasteful process. As the arguments ... Bitcoin’s bulls are back, and so is the genesis cryptocurrency’s mining industry. As such, one startup is on the verge of launching what would instantly become the most sprawling solar-powered bitcoin mining operation in all of North America. A subsidiary of Houston-based holding company Plouton Group, Plouton Mining announced on June 25th its intentions to And if Bitcoin mining steps up a gear, those figures can only rise. This power-thirsty technology then seems at odds with solar energy at first. After all, solar power users are generally aiming to make a positive difference against climate change. Yet, this is where solar energy blockchain systems could allow for the two to exist and bloom in harmony. With the majority of Bitcoin users made ... Star Trek star William Shatner has made a move into the cryptosphere by setting up a new solar-powered Bitcoin mining business. Shatner is representing Solar Alliance, a natural energy developer. Mr. Shater, best known as Captain Kirk in Star Trek, is working to build a solar-powered Bitcoin mining facility. Bitcoin mining is forcing me to go solar power. I just installed solar panels to run my miners during the day. Not only does my house get heated but I cut the mining cost by 75%. Why? It’s not just the cheapest form of energy, but I get rid of the grid-transfer cost and tax (=75%!) Obwohl Studien belegen wollen, dass 75 % des Stromes, der für Bitcoin Mining eingesetzt wird, von erneuerbaren Energien stammt, zahlt sich in Deutschland das Bitcoin Mining mit Solarstrom genauso wenig aus wie jenes mit Strom vom Anbieter. Vielleicht schaut es weiter südlich besser aus, da dort mehr Sonnenleistung die Erdoberfläche erreicht und die Anlagen dadurch mehr Leistung erzielen ... Bitcoin mining, the process by which more Bitcoin is obtained, is extremely energy intensive. It is becoming increasingly difficult to generate sufficient income through Bitcoin mining to offset the cost of the electricity used in the task. As a solution, miners are turning more and more to renewable energy sources and solar in particular.

Is Mining Bitcoin with Solar Power Really Worth Your Money ...

This is an educational video on bitcoin mining of binance pool and not a financial advice. #Binance #BinancePool #Binance pool If you want to sign up to Bina... NEW CHANNELS: TechStockHouse: https://www.youtube.com/channel/UC8IzbdgN-IDXlWH0dNdgGag TechCryptoHouse: https://www.youtube.com/channel/UCp7Gqpl9Kqiggr_Rs03X... willkommen zur Bitcoin-Informant Show Nr. 870. Heute sprechen wir über folgende Themen: Binance startet eigenen Bitcoin Mining Pool, Institutionen zeigen grosses Interesse an Ethereum & Bitfinex ... Part 1 outlining my idea for a solar mining project **i am not a professional i dont know what im doing 73% of the time if you have helpful comments please f... 🔥 Get the Ledger Nano X to Safely store your Crypto - https://www.ledgerwallet.com/r/acd6 🔥 Become a Channel Member - https://www.youtube.com/channel/UCjpkws... SUBSCRIBE FOR MORE HOW MUCH - http://shorturl.at/arBHL Here is the update you have been asking me for. This solar experiment is a success! and... it can game... Mining Bitcoin and cryptocurrency is harder than ever before, and it is also EXTREMELY PROFITABLE if you have cheap power. More people are exploring solar an... SUBSCRIBE FOR MORE HOW MUCH - http://shorturl.at/arBHL So many subscribers asked me about solar so here you go, fully solar mining rig off the grid (with int... Overview and interview with CrazyDane about his super top secret off the grid cryptocurrency ASIC & GPU mining farm somewhere in Virginia, USA. CrazyDane des... A quick walk through of my solar-powered Bitcoin farm